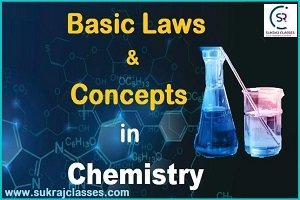 Important law’s and Concepts in Chemistry:-

Law of Conservation of Mass:-

The Law of Conservation of Mass was proposed by “Antoine Lavoisier” in 1789. According to this law, “Matter can neither be created nor destroyed in a chemical reaction”.

This law was discovered in 1811 by “Amedeo Avogadro”.

Boyle’s law states that “the absolute pressure exerted by a given mass of an ideal gas is inversely proportional to the volume it occupies if the temperature and amount of gas remain unchanged within a closed system”.

Charles’s law is an experimental gas law that describes how gases tend to expand when heated.

Dalton’s law of partial pressures states that the pressure of a mixture of gases is equal to the sum of the partial pressure (that each individual gas) would exert by itself at the same volume and temperature.

Where, Pt is total pressure of the mixture of gases and P1, P2, P3, … Pn. are the partial pressures of the individual gases.

Henry’s Law states that at the amount of gas that is dissolved in a liquid is directly proportional to the partial pressure of that gas above the liquid when the temperature is kept constant.

This law states that at given temperature and pressure the volumes of all gaseous reactants and products bear a simple whole number ratio to each other.

Graham’s Laws of Diffusion and Effusion:-

If you like and think that General Science (Chemistry) topic on “Important law’s and Concepts in Chemistry” was helpful for you, Please comment us. Your comments/suggestions would be greatly appreciated. Thank you to be here. Regards – Team SukRaj Classes.

Metalloids and Their Properties- Competitive Chemistry