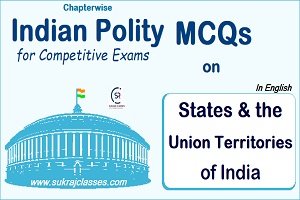 Indian Polity MCQs on “States and the Union Territories of India”, are important questions for all competitive exams i.e. UPSC, SSC, Railways, Banking, CET etc. Many questions were asked in pervious year’s exams from this topic. Let’s start the topic:

Indian Polity MCQs on “States and the Union Territories of India”

Que- 1. Power to include or admit any State into Union of India is given to…?

(A) President of India

Que- 2. According to Article 1 of Indian Constitution, India is….?

(A) Group of States

(B) Federation of States

(D) The Union of States

Que- 3. Indian Parliament has the power to create a new State under which of the following Constitutional provisions?

Que- 4. Who among the following has the executive power to admit a State in the Union or establish new States?

Que- 5. Which one of the following is not correct in the matter of formation of new States?

(A) Parliament may by law form a new State.

(B) Such law shall contain provisions for the amendment of the First Schedule and the Fourth Schedule of the Constitution.

(C) Such law shall be deemed to be an amendment of the Constitution for the purpose of Article 368.

(D) No Bill for enacting such law shall be introduced in the Parliament unless it has been referred to the Legislature of the States, whose areas, boundaries or name is affected.

Correct Answer
Option (C) Such law shall be deemed to be an amendment of the Constitution for the purpose of Article 368.

Que- 6. Which one of the following is empowered to alter the boundaries of States under the Constitution of India?

Que- 7. Creation of a new state requires a ……. majority for Constitutional Amendment.

(D) Two-third plus ratification by half of all states

Que- 8. A Bill for the purpose of creating a new State in India must be passed by …?

(A) A simple majority in Parliament and ratification by not less than two-third of the States.

(B) A simple majority in Parliament.

(C) A two-third majority in Parliament and ratification by not less than two-third of the States.

Correct Answer
Option (B) A simple majority in Parliament.

Que- 9. Which among the following is not a ‘constitutional provision for the formation of new States’?

(A) Increase the area of any State

(B) Diminish the area of any State

(C) Alter the name of any State

(D) A State may include a Union territory

Correct Answer
Option (D) A State may include a Union territory

Que- 10. Union Territories in India are administered by….?

(B) The Lt. Governor

Correct Answer
Option (A) The President

Que- 11. If a new state is to be formed, which schedule of the constitution will need to be amended?

Que- 12. How many States and Union Territories are there in India?

(A) 25 States and 7 Union Territories

(B) 28 States and 8 Union Territories (including national capital territory)

(D) None of the above

Que- 13. How many States and UTs did the States Reorganization Commission create in 1956?

Que- 14. Which of the following is not a Union Territory?

(A) The Andaman and Nicobar Islands

(B) Jammu and Kashmir

Que- 15. In which year were the Indian States reorganized on the recommendation of the State Reorganization Commission?

States and the Union Territories of India

Indian Polity MCQs on The Constitutional Development of India

Indian Polity MCQs on Foreign Impact on the Indian Constitution

Indian Polity MCQs on ‘The National Emblems (Symbols) of India’

Indian Polity MCQs on “The Citizenship” in the Indian Constitution

Recent Posts
Follow Us
Find Us On Facebook
Copyright 2023 - Sukraj Classes All Rights Reserved.
Back To Top
×