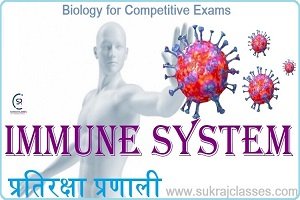 Our immune system helps to protect us against diseases caused by tiny invaders (called pathogens) such as viruses, bacteria, and parasites. The immune system is made up of specialized organs, cells, and tissues that all work together to destroy these invaders. Some of the main organs involved in the immune system include the spleen, lymph nodes, thymus, and bone marrow. Immunity to some diseases is passed on from our mothers before we are born.

Our immune system develops all kinds of cells that help to destroy disease causing microbes. Some of these cells are specifically designed for a certain kind of disease. All throughout the body, disease fighting cells are stored in the immune system waiting for the signal to go to battle.

The immune system is able to communicate throughout the entire body. When pathogens are detected, messages are sent out, warning that the body is being attacked. The immune system then directs the correct attacking cells to the problem area to destroy the invaders. Antibodies are designed with specific binding sites that only bind with certain antigens. They ignore “good” cells and only attack the bad ones.

The immune system is very smart and can adapt to new infections. Our bodies gain immunity in two ways: active immunity and passive immunity.

Everybody has an inbuilt immune system which protects it from germs. This system has a lot of different parts which work together to keep out any harmful germs, and attack and destroy any which manage to get inside our body. Our immune system has cells that perform specific functions. These cells are found in the blood stream and are called white blood cells.

So, let’s have a look at the immune system, starting from the outside of the body.

The skin is the first line of defense in our immune system that wrap to keep germs from getting into our body.

There are two different types of lymphocytes:

4. Memory cells – Memory cells remember antigens that have already attacked the body. They help the body to fight off any new attacks by a specific antigen.

Other defenses for immunity:

Our nose, mouth and eyes are the next point of attack.

How does our immune system know which cells to attack?

Our body has lots of friendly bacteria around it which help our body work properly – eg. Some bacteria inside our bowel help us to digest our food and break it up into the different things that are needed in various parts of the body. These friendly bacteria live on the surfaces of the body, such as on our skin or inside the bowel. They do not try to invade the body, so the immune system does not try to get rid of them.

How Vaccines Work to enhance immunity:

Vaccines introduce microbes that are already killed or modified so we don’t get sick. However, the immune system doesn’t know this. It builds up defenses and antibodies against the disease. When the real disease tries to attack, our body is ready and can quickly neutralize the antigens.

If you like and think that Biology topic on ” Immune System of Human body (प्रतिरक्षा तंत्र)” is helpful for you, Please comment us. Your comments/suggestions would be greatly appreciated. Thank you to be here. Regards – Team SukRaj Classes.