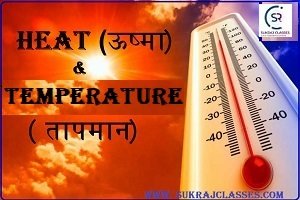 Heat can be defined as a form of energy that can be transferred from one body to the other or within the body itself with a temperature difference and can be generated by a body at the expense of other forms of energy.

Heat energy is the result of the movement of tiny particles called Atoms, molecules or ions in solids, liquids and gases. Heat is the transfer of energy from one object to another. The transfer or flow due to the difference in temperature between the two objects is called Heat.

Transferring of Heat When two items are combined or touching each other, their molecules will transfer energy called heat. They will try to come to a point where they both have the same temperature. This is called Thermal Equilibrium.

For example: – when we take an ice cube and put it into a glass of warm soda. If we put the ice in the soda, the soda (which is warmer) will transfer some of its heat energy to the ice. The ice cube will become warmer and melt, while the soda will cool down. At this stage soda and water from the ice will be at the same temperature, this is called the stage of thermal equilibrium.

In Convection, process by which heat is transferred by a medium such as air or water.

It is the method in which the transfer of heat takes place without any medium or in vacuum.

2) Two blankets are warmer than single one because air present between them act as insulator of heat.

3) When a metabolic sphere heated, their area will increase.

4) When hole in a metallic sheet, make heated, its size increase.

5) If a door of freeze open in a room, the temperature of room gradually increase.

6) Freezer always feted in upper part of freeze, to keep away compressor heat.

7) After accumulation of ice in freezer, freeze does not cool properly, because ice is bad conductor of heat. Hence, advice to defrost freeze.

10) A.C. and freeze cools by the “vaporization” of volatile liquid.

11) A.C. controlled temperature as well as relative humidity of the room.

12) Cooler, pitcher cools by the process of “evaporation” of water. It does not cool in rainy season because atmospheric humidity too much, the evaporation of water does not occur at the rainy season.

13) When water heated above Zero Degree,  the density firstly increase then decrease.

14) When water heated above Zero Degree, the volume firstly decrease then increase.

15) When Ice melts, The Volume of the mixture of ice and water does not change.

Latent heat, energy absorbed or released by a substance during a change in its physical state (phase) that occurs without changing its temperature.

1) All the ice does not melt at-once at hills tops (glaciers), due to high latent heat.

3) Water has a fix Boiling point at 100 degree, due to latent heat.

4) Freezing point of water is fix at Zero degree, due to latent heat.

1) Water is use in boilers, due to it’s high specific heat.

2) Water is also use in rubber bladder for sacking purpose due to it’s high specific heat.

Melting point (गलनांक बिंदु):  The melting point is usually defined as the point of temperature at which materials changes from solid to liquid.

Freezing point (हिमांक बिंदु): It is the temperature at which a liquid becomes a solid.

Triple point of water is defined as the temperature and pressure at which liquid water, solid ice and water vapour can coexist in a stable equilibrium.

Condensation (संघनन): It is the process of change of physical state of a matter from the gas phase into the liquid phase

Temperature is the degree of hotness or coldness of a body or environment.

A measure of the warmth or coldness of an object or substance with reference to some standard value.

2)  It is measured by  Thermometer.

4) Thermometers are calibrated in various temperature scale. The most common scales are the Kelvin, Fahrenheit, and Celsius scale.

Temperature is measured by the thermometer. Why mercury used in thermometer:

3) It not stick with the wall of container glass. In rocket cryogenic engine use.

Pressure is the force applied perpendicular to the surface of an object per unit area.

2) Pressure cooker cooked the food earlier, due to high pressure.

3) By adding salt in water, it’s boiling point get increased.

5) By adding salt or by increasing pressure on ice, their melting point increase. That’s why kulfi – maker, mix salt in ice.

When two pieces of ice – cube pressed together, they joint in single one due to process of regelation.

If you like and think that General Science (Physics) topic- “Heat (ऊष्मा) and Temperature (तापमान)” was helpful for you, Please comment us. Your comments/suggestions would be greatly appreciated. Thank you to be here. Regards – Team SukRaj Classes.