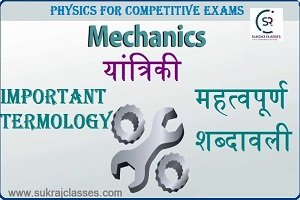 Difference between speed and velocity:- Pressure is the force acting normally per unit area on the surface of a body.

Weight: – Weight is the force exerted on a body by gravity.

Difference between Mass and Weight:-

Work measure of energy transfer that occurs when an object is moved over a distance by an external force at least part of which is applied in the direction of the displacement.

If you like and think that General Science (Physics) topic on- Mechanics Important Terms (यांत्रिकी-महत्वपूर्ण शब्दावली), was helpful for you, Please comment us. Your comments/suggestions would be greatly appreciated. Thank you to be here. Regards – Team SukRaj Classes.