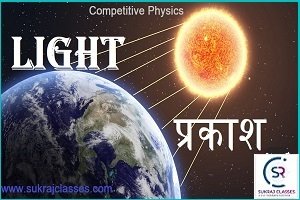 Light or visible light is a transverse, electromagnetic wave that can be seen by the human eyes.

So, light is also not required any medium to propagate. It can be travelled in vacuum also. Electromagnetic radiation have a wide range of wavelengths, from gamma rays to radio waves measured in meters.

Band of visible light comes, from about 700 nanometers (nm) for red light to about 400 nm for violet light.

Geiger Muller Counter (GM counter): – This device used for the detection and measurement of all types of radiation alpha, beta and gamma radiation

Scattering of light is the phenomenon in which light rays get deviated from its straight path on striking an obstacle like dust or gas molecules, water vapors etc.

Important Fact of scattering of light: Light absorption is a process by which light is absorbed and converted into energy.

Absorption depends on the electromagnetic frequency of the light and object’s nature of atoms. The absorption of light is therefore directly proportional to the frequency. If they are complementary, light is absorbed.

The process through which light rays falling on the surface on an object are sent back or bounces back the light is called reflection of light.

Refraction is the bending of a wave when it enters a medium where its speed is different.

Incident ray: The ray of light falling on the surface of a mirror is called incident ray.

Normal: A line perpendicular or at the right angle to the mirror surface at the point of incidence is called normal.

Light bends when it passes around an edge or through a slit that is physically the approximate size of, or even smaller than that light’s wavelength. This bending is called diffraction.

Important Facts of diffraction of light: 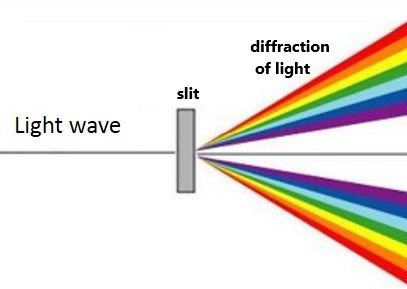 When white light is passed through a glass prism it splits into its spectrum of colors (in order violet, indigo, blue, green, yellow, orange and red) and this process of white light splitting into its constituent colors is termed a dispersion. Some Other Important points About Light:

If you like and think that General Science (Physics) topic on “Light (प्रकाश) and Its Facts” was helpful for you, Please comment us. Your comments/suggestions would be greatly appreciated. Thank you to be here. Regards – Team SukRaj Classes.

Important Discoveries and Inventions in Physics