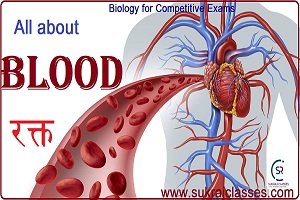 Blood is a body fluid with a combination of plasma and cells. It circulate necessary substances such as nutrients and oxygen to the cells and transports metabolic waste products away from those same cells.

Study of blood is called – HEMATOLOGY.

The main functions of blood are to transport oxygen, carbon dioxide, water, nutrients, hormones and waste around the body. Blood also fights infection and regulates temperature. It is Liquid portion of Blood. It contains 92 percent water, constitutes 54 % of total blood volume. This is a clear, pale yellow liquid, which carries all the blood cells and platelets and chemicals such as hormones and glucose.

Sometimes people need extra blood because they have lost more than the body can make in a short time or they are not making enough red blood cells (this is called anemia).

Doctors can give blood from one person to another in what is called Blood–Transfusion (रक्तदान).

The blood that someone is given is ‘matched’ so that it won’t be destroyed by their immune system. b)  Process of Blood- Circulation.

Important facts about Blood in Human Body for Competitive Exams

If you like and think that Biology topic on “Blood in Human Body (मानव-रक्त)” is helpful for you, Please comment us. Your comments/suggestions would be greatly appreciated. Thank you to be here. Regards – Team SukRaj Classes.